So, What Happened to the December Raffle? 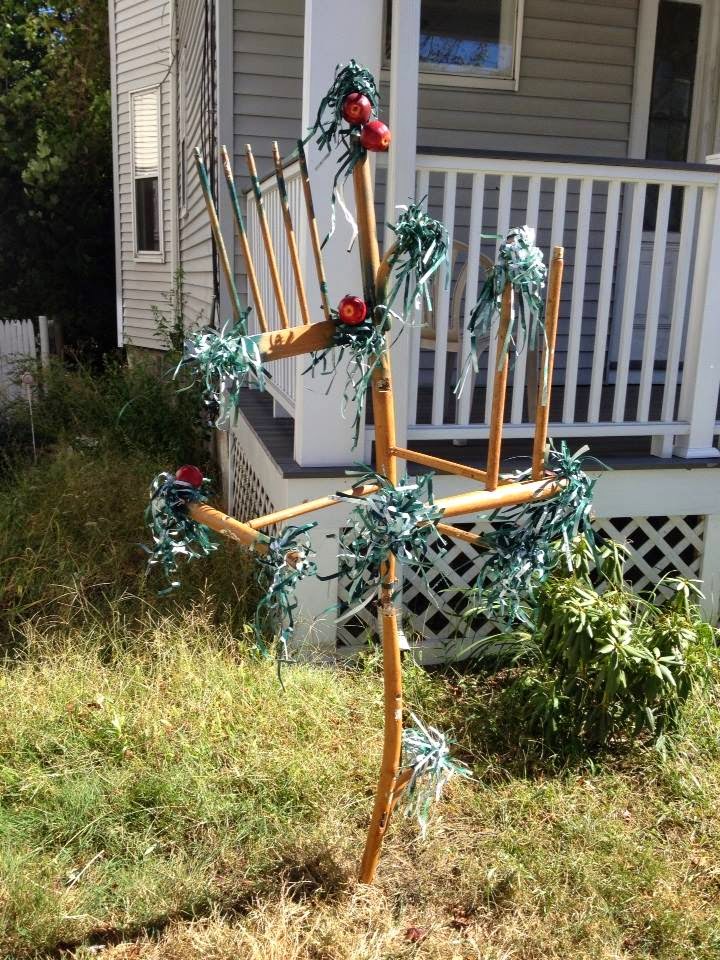 After a long wait and a whole lot of change, the December raffle for Regrets has finally metamorphosized and come to roost with me in Somerville, MA.  Regrets has become Rebirth & Renewal and has been planted in front of my new home, as pictured here.  The piece will eventually wear away and deteriorate, evidencing a new beginning.
Posted by ChaoticBlackSheep at 5:02 AM 1 comment:

Email ThisBlogThis!Share to TwitterShare to FacebookShare to Pinterest
Labels: raffle

In Response, Some Thoughts

I had really dreaded reaching the 10-year mark in my art career because that is typically when one is no longer considered emerging, and I didn't feel that I was ready, nor did I feel like I had matured as an artist.  I worried that I would lose out on opportunities, especially since much of my work is challenging & provocative and does not stick to a personal, easily identifiable signature approach or style, all of which make it considerably harder for me to pursue solo endeavors and/or build a steady fan base.

However, by reconciling this over the span of the entire year through my anniversary celebration, with all of its ups and downs, and culminating it in the big LAST CHANCE! show, I sense that I have physically made manifest that which I was uncertain of by essentially creating my own "coming-of-age as an artist" ritual.  Though I am still very much processing it, I feel that this entire experience has transformed me, and has ignited my passion for art once more and made me more accepting of where I am, what I have and haven't done, and further opportunities for growth and development.

Thank you again for all of your support.  I invite you to continue to join me on this crazy journey as I navigate the next 10+ years of my art career.

PS.  I didn't cancel the December raffle for naught and shall revisit it when the time is right.  I intend to post the results here when I do so.  Metamorphoses take time...
Posted by ChaoticBlackSheep at 12:33 PM No comments:

Email ThisBlogThis!Share to TwitterShare to FacebookShare to Pinterest
Labels: aftermath

I, Jennifer A. Weigel, hereby declare that any funds generated from sales during my 10-year art anniversary LAST CHANCE! One Night Only! retrospective exhibition and performance on Saturday, December 8, 2012 shall be donated to the St. Louis Chapter of the Women’s Caucus for Art to help establish a Local Legacy Fund.

This fund shall continue the efforts of the national legacy campaign & initiative on a local level, promoting women artists of the greater St. Louis metro region and helping to ensure that we are recognized for our achievements; collected among local institutions, colleges and universities; and written into local history.  I will gladly work with the Board to help determine what this means and how these monies may be used towards this end.

I welcome anyone who wishes to donate more monies towards the establishment of this fund to join me in doing so.  Let’s make sure that our local legacies continue to live on so that we may continue to connect with, inspire, and promote women artists within our community as well as abroad.

Above is the announcement I delivered at the St. Louis Chapter of the Women's Caucus for Art holiday party this evening after considering what I wanted to do with the monies generated from sales from my LAST CHANCE! show.  Although selling my work was clearly part of the original intent (as evidenced by my flyer), I hadn't thought through the outcome of what I would do with the money since I was focused more on the logistics of the show itself and presumed I'd likely not sell anything anyway, preferring not to get my hopes up.

I know I could just keep the proceeds, but I have instead decided to use them to instill a sense of hope and bring some closure to the discourse that I raised.  By helping to create a legacy fund aimed at recognizing local talent, I hope that this need becomes better addressed and that, with time, some of the questions and concerns I posed in my show may thusly be resolved.
Posted by ChaoticBlackSheep at 9:01 PM No comments:

Email ThisBlogThis!Share to TwitterShare to FacebookShare to Pinterest
Labels: aftermath

Indoor footage & conclusion of the destruction of over 150 artworks during Jennifer Weigel's 10-year art anniversary celebration finale LAST CHANCE! One Night Only! a retrospective show and performance event at Fort Gondo Compound for the Arts, St. Louis, MO on Saturday, December 8, 2012, 6 - 10 PM.

Performed by artist Jennifer Weigel
Recording by David Wilbur
Posted by ChaoticBlackSheep at 11:12 AM 2 comments:

Outdoor footage of the destruction of over 150 artworks during Jennifer Weigel's 10-year art anniversary celebration finale LAST CHANCE! One Night Only! a retrospective show and performance event at Fort Gondo Compound for the Arts, St. Louis, MO on Saturday, December 8, 2012, 6 - 10 PM.

After my speech, Chuck read this Declaration of Legacy as a "will" of sorts and distributed signed & authenticated copies (printed two-sided with my artist's statement), encouraging those who attended the event to take detritus from destroyed artworks as party favors, souvenirs, mementos and/or materials to repurpose into new art.

I, Artist Jennifer A. Weigel, hereby declare that those Artworks created over the course of my career as a practicing Artist and accumulated during my life shall be destroyed upon my passing so to not grant greater significance and value to my Artworks through my death.

I shall not relinquish my Artworks to misinterpretation and misrepresentation by those critics, curators and historians who were disinterested in those very same Artworks over the course of my career as a practicing Artist.

I shall not allow my Artworks to increase in monetary value to collectors, dealers and patrons upon my death after remaining unsold, underbid through auctions & raffles, and being otherwise devalued during my life.

I shall not leave a legacy of Artworks to an unappreciative, undeserving and unsupportive public following that undermines living, local Artists in favor of those who are deceased or hail from afar.

Therefore, I declare that any Artworks in my possession upon my death that somehow escape destruction are henceforth disowned and disavowed by myself, Artist Jennifer Weigel, and shall no longer be considered viable as my own for the purposes of value assessment.

In contrast, I hereby grant that the remains of those Artworks destroyed shall be allowed to act as Genuine Articles of my passing to record my career as a practicing Artist and to document my life, and may be distributed as such only if accompanied by a signed copy of this Declaration, as authenticated by my Husband Charles G. Wilbur.

These remains serve as a Genuine Article to act as documentation of the career and life of Artist Jennifer A. Weigel as authenticated by this copy of her Declaration of Legacy, originally distributed on Dec. 8, 2012 during her 10-year art anniversary retrospective show, Last Chance! One Night Only!

Posted by ChaoticBlackSheep at 9:59 PM No comments:

Email ThisBlogThis!Share to TwitterShare to FacebookShare to Pinterest
Labels: show

These speeches preceded the destruction of over 150 artworks during Jennifer Weigel's 10-year art anniversary celebration finale LAST CHANCE! One Night Only!

Performed by Jennifer Weigel & her husband Charles Wilbur
Recording by David Wilbur
Posted by ChaoticBlackSheep at 6:41 PM No comments:

ChaoticBlackSheep
I am a predominantly conceptual artist working in a variety of media and techniques, including performance & installation art, assemblage, video, fiber, drawing and more. I explore many different themes and ideas in my work, including environmental concerns, institutional critique, feminism, identity issues and so on.